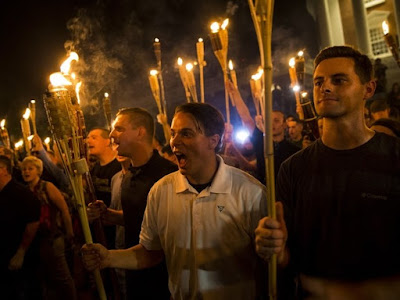 He claimed to have closely followed the events in Charlottesville, VA, where white supremacists chanted "Jews are Satan's children," shouted racial slurs at town residents, and which culminated in the murder of a young protester at the hands of a right-wing domestic terrorist.

Observing all this, he said both sides were to blame. He also said there were "fine people" on both sides.

The president has failed to condemn white supremacists in the past. But his repeated defense of them is a new low. He must bear a cost for this historic moral failure.

I'm writing to you as a constituent deeply disturbed by President Trump's statements on the deadly events that took place in Charlottesville, Virginia. The president's failure to unequivocally condemn neo-Nazis and white supremacists -- and worse, his moral equivalence between those groups and protesters who bravely turned out to oppose hate -- is a stain on his presidency and upon this nation.

Congress must speak out with one voice and formally condemn President Trump's defense of white supremacists. A bipartisan censure would send a signal to the president that he has crossed a line, and would send a message to the world that his behavior this week does not represent American values.

The president failed a test of moral leadership. Now Congress is faced with a similar test. I hope you will do the right thing and back legislation to censure President Trump.