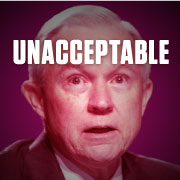 Fresh off of renewing the racist “war on drugs” and boosting private prisons, Attorney General Jeff Sessions is now going after sick people.

In a private letter to congressional leaders, Sessions demanded permission to prosecute medical marijuana providers and patients. For years, a bipartisan agreement in Congress has denied funding to the Department of Justice for such prosecutions. Now, Sessions is using scare tactics to try and undo that agreement.1
In states where medical marijuana is permitted, fewer people get hooked on dangerous opioids.2 Sessions’ dangerous crusade will put sick folks at risk and supercharge the opioid epidemic. We can’t let that happen.
Tell Congress: Protect medical marijuana from Jeff Sessions.
Jeff Sessions once allegedly joked that he had no problem with the Ku Klux Klan “until I found out they smoked pot.”3 That’s all you need to know about his warped priorities. Since taking office, Sessions has insisted that America is in the grip of a crime wave even though violent crime is at historic lows, demanded that prosecutors pursue the strongest possible penalties for non-violent offenses, hamstrung oversight of abusive police departments and recommitted to using dangerous and inefficient private prison companies.4
Now, he is going after sick people and risking inflaming the opioid epidemic. Sessions personally requested that the Senate Appropriations Committee reject an amendment, in place since 2014, that bans the Department of Justice from interfering with states that permit medical marijuana distribution, use or possession. The powerful committee recently rejected Sessions’ request – but the rest of Congress still has to agree in order for the amendment to be included in final legislation.5,6
Sessions is trying to turn back the clock and reboot the war on drugs, putting lives at risk in the process. He already has bipartisan opposition, but we need to make sure lawmakers find the courage to fight his scaremongering.
When people do not have access to medical marijuana, they are more likely to turn to dangerous, addictive and potentially lethal opiate painkillers. The National Institute on Drug Abuse confirms more and more research showing that states with medical marijuana laws have fewer overdoses and deaths.7
Sessions’ racist, xenophobic, pro-incarceration tenure at the Department of Justice is one of the most damaging parts of the Trump administration. Already over 368,000 CREDO members have called for his removal. We can win this fight to protect patients and further show that Sessions has no place in the Department of Justice, so we need to speak out with force immediately.
Tell Congress: Protect medical marijuana from Jeff Sessions.
Petition to Congress:
"Protect sick people and fight the opioid epidemic by resisting Jeff Sessions’ misguided crusade to prosecute medical marijuana providers and patients. Support bipartisan legislation banning the Department of Justice from prosecuting medical marijuana patients and respecting states' ability to set their own medical marijuana laws."
Add your name:
Thank you for speaking out.
- Credo
References:
Posted by Jana Segal at 4:08 PM