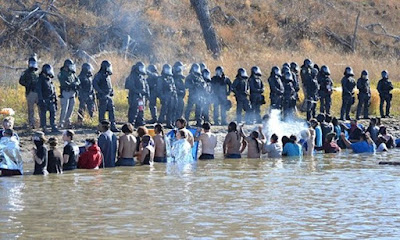 Water protectors are not criminals. They put their lives on the line to keep DAPL from putting a pipeline under the Missouri River (that provides water for 18 million Americans). Take a stand for those who stood for all of us at Standing Rock by urging North Dakota to #DropDAPLCharges now: https://www.lakotalaw.org/our-actions/drop-the-charges

Sign the Petition to ask North Dakota's State's Attorney to drop all charges against water protectors.

I am writing to ask you to drop all charges against water protectors arrested at Standing Rock whom you are presently criminally prosecuting.

• Paid security operatives and employees to infiltrate camps to provoke violence, disruption, and dissent among the nonviolent water protectors, to create divisions based on race and religion, and to plant contraband in the belongings of peaceful and prayerful demonstrators;

• Engaged in a campaign to spread false and defaming information about Water Protectors and Native American tribal members in local, state, and national media outlets and on social media;

• Instigated and directed state and local law enforcement to take action based on physical and electronic surveillance that violated individuals’ constitutional rights to privacy and that targeted people based on race, religion and political beliefs;

• Falsely characterized the nonviolent Water Protectors as “religiously motivated jihadists” and “domestic terrorists” in order to instigate extreme and ongoing violence against them on the part of North Dakota law enforcement, causing one woman to lose her eye and another to lose the use of her arm.

All of this was done while TigerSwan knowingly operated in the State of North Dakota as a private security company without the required state license. Moreover,  TigerSwan was also operating in the employ of the Morton County Sheriff's Office.

I urge you to take decisive action to protect the fundamental rights of the water protectors by ordering the immediate dismissal, with prejudice, of all state criminal cases brought against them as a result of their participation in the protest against the Dakota Access Pipeline and its attendant threats to clean drinking water, sacred religious spaces, and our planet's environment.
Posted by Jana Segal at 8:32 AM