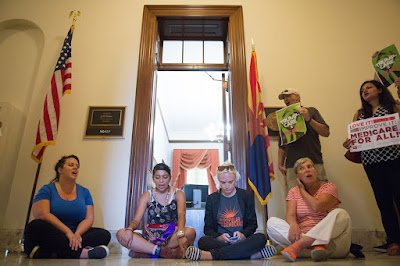 Two weeks ago, Senator Jeff Flake literally voted to let his constituents die by taking away their health care. Right now, while he's home for August recess, it's time to hold him accountable.

"Welcome" Senator Flake home from Washington with a demonstration outside his Tucson office this Thursday, August 10, at 12 p.m.

While he is home from Washington, Senator Flake, the public, and the media will be paying close attention to the grassroots response. That's why it's crucial he sees that his constituents haven't forgotten about his horrible vote.

So far, the unprecedented amount of activism both in Arizona and around the country have been successful in staving off the fiercest attacks on our health care system by Republicans in Congress. But we know they aren't finished. The president has already admitted that his and the Republicans' next plan is to try to sabotage health care for millions of citizens.1 If we want to continue to hold the line and protect health care for women and families, it's clear that members of Congress can't be let off the hook--especially in their home states, and especially over the recess.

Senator Jeff Flake's vote to take away our health care is unforgivable--join UltraViolet members this Thursday, August 10, to show him how angry you are.