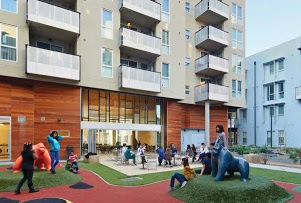 Next month, Congress will debate and likely vote on Donald Trump’s first budget as president. Included in his proposed budget is $7 billion (not million, BILLION) in cuts for important programs at the Department of Housing & Urban Development (HUD).


HUD Secretary Ben Carson can stand up to Donald Trump and push back on these budget cuts that will destabilize our communities and only provide more tax cuts for the rich.

Trump’s budget is, to use his favorite terminology, a “total disaster.” First, it slashes spending on affordable housing programs like Section 8. It also cuts the budget for community development resources, like the 42-year-old program that provides funding for improvements to parks and child care facilities. The proposal also eliminates the Housing Trust Fund, a program financed by Fannie Mae and Freddie Mac profits.

Fortunately, Trump’s budget has hit many setbacks along the way. When first presented to Congress in June, it was met with bipartisan disapproval. Even Republicans weren’t convinced the huge cuts to domestic programs in Trump’s budget would be enough to offset the increase in military spending and tax breaks for the wealthy.

But that doesn’t mean HUD is safe. If Trump gets his way, thousands of families who rely on essential housing programs like Section 8 and community development grants will be left out in the cold — quite literally.

Sign the petition to get Secretary Carson to fight for his department and those who rely on HUD programs to survive!

The Trump administration’s cuts of over $7 billion to federal housing programs is completely unjust. Hundreds of thousands of Americans rely on HUD programs to provide a roof over their heads.

Without funding for these programs, low-income communities will be left without resources for housing, leading to increased homelessness.

You must show the necessary leadership to stop these immoral cuts to housing and call for full funding of HUD. Stop Trump’s cuts to HUD and demand full funding for federal housing programs.
Posted by Jana Segal at 4:44 PM