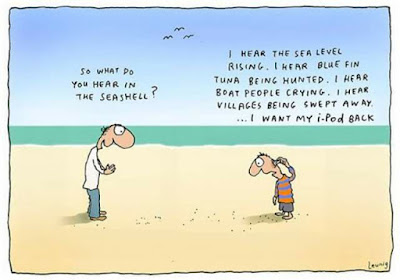 Last night I watched "Years of Living Dangerously." They were investigating how CO2 is making the oceans acidic. This has caused over 40% of the corral reefs to dissolve into sand. If we keep going the way we are, by 2050 all of the reefs will be gone. Imagine how that will affect our delicate, interconnected ocean habitat. People all over the world rely on the oceans for their food and even the air we breath.

In the Philippines, they witnessed how the corral reefs being damaged by a storm affected the island people who relied on the sea for their food. They were running out of fish. A fisherman was down to one meal a day for his family. His son was studying so he could leave the island - because the island could no longer support them. These people are suffering because of our choices - like burning fossil fuels.

This is an emergency. President Obama understood the gravity of the situation and approved the largest marine sanctuary to protect some of the reefs. The Trump administration wants to remove that protection and allow oil drilling in that marine sanctuary and many of the shore line national parks.

Please, tell the Bureau of Ocean Energy Management to oppose lease sales for new offshore oil drilling.
Posted by Jana Segal at 8:07 AM