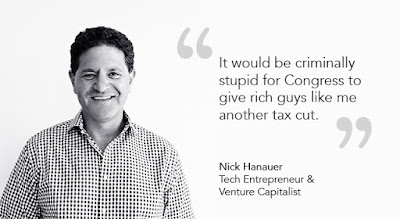 My name is Nick Hanauer and I’m filthy rich. I’m not a 1%’er. I’m a 0.001%’er. If you read the business section of the paper, you’ve probably seen my name: I was one of the first investors in Amazon.com. I’ve sold other companies for billions of dollars, and now my friends and I own a bank. I’m a proud and unapologetic capitalist.

So you might be surprised to learn that I’m starting a petition to say that it would be criminally stupid for Congress to give rich guys like me another tax cut.

In fact, I believe that not one penny in tax cuts should go to millionaires, billionaires and wealthy corporations. Everyone knows that the biggest lie in economics is that tax cuts for the rich create growth and jobs. When Republicans talk about tax reform, they’re really talking about trickle down nonsense. The truth is, taxes on the rich don’t need to be “reformed”—they need to be raised, because it’s investments in the middle class that make our economy grow.

Our democracy and our economy are being ripped apart by growing inequality. Tax cuts for the rich masquerading as reform will only make it worse. I need you to help me fight for a tax code that puts working families back at the center of the economy.Another round of tax breaks for people like me will undermine our commitment to what really makes our country stronger: Social Security, Medicare, Medicaid, public education, investments in infrastructure and R&D, and more -- and make it impossible for the middle class to fulfill their function as the true job creators.

Join me and pledge to oppose any effort to cut taxes for the wealthy and well-connected. Not one penny in tax cuts should go to millionaires, billionaires and wealthy corporations.

Add your name if you agree:

Email ThisBlogThis!Share to TwitterShare to FacebookShare to Pinterest
Labels: Nick Hanauer billionaire, no tax cuts for the rich, Not One Penny