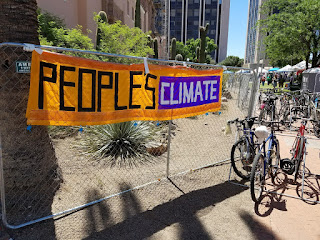 Yesterday, 200,000 people came together for the Peoples Climate March in our nation's capital, with thousands more marching in communities around America and the world.

We sent a message loud and clear to President Donald Trump and Congress: it's time to stop the backsliding on climate change; it's time to meet the most urgent challenge of our generation.

After just 100 days of a Trump Presidency, America's leadership on climate change is melting away. Trump vowed to put America first. Instead, his climate-destruction and polluter-first energy policies are putting us dead last.

That's why it's so crucial that we build on the momentum of the Peoples Climate March.

You can start by signing NRDC's Climate Action Petition. Demand that Trump, his Cabinet of Polluters and Congress put an end to climate denial and begin restoring America's climate leadership.

Our petition goal is 500,000 signers to show America's leaders that we are determined to win real action on climate and clean energy.

But Trump's biggest target is the Clean Power Plan. With support from fossil fuel CEOs and their allies in Congress, his administration is working overtime to kill President Obama's groundbreaking plan to reduce climate pollution from America's dirty power plants — the largest source of climate pollution in America.

NRDC has a strategy aimed squarely at stopping Trump from eviscerating the Clean Power Plan. This includes defending the plan in court with the full force of our legal team.

But the most important part of our strategy is you! We once again turn to you and hundreds of thousands of like-minded people who turned out for the Peoples Climate March or were there in spirit.

Please keep the momentum going by signing the Climate Action Petition. Demand that Trump and other leaders shelve efforts to kill the Clean Power Plan and act to restore America's leadership on climate and clean energy.

Stay tuned for urgent updates from NRDC in the weeks and months ahead with more details about our climate fight and what you can do to stand up for the Clean Power Plan.

Rhea Suh
President, NRDC
Posted by Jana Segal at 9:43 AM