There must be a good reason that Jeff Merkley spoke for 16 hours against Trump's appointee Judge Neil Gorsuch... 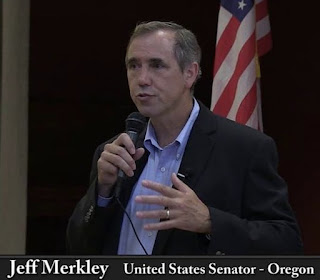 "It's outrageous that the Senate would hand a lifetime appointment to Trump while Trump's team is still at the center of a criminal investigation about its possible collusion with Russia to influence our elections. And even more outrageous that Senate Republicans are considering changing the rules of the Senate to rush through this divisive, right-wing judge-after refusing to give Obama's centrist nominee, Merrick Garland, a hearing, much less a vote, for eight months."

Add your voice to those speaking against Gorsuch. Call your senators at 1-866-943-8027 and tell them to oppose Gorsuch and any rule change to let his nomination through.

Despite the ethical cloud around the White House, swirling allegations about Russia, and the inability of Trump's radical nominee to get 60 votes, Senate Republicans want to change the rules so they only need a simple majority to give Gorsuch a lifetime appointment to our highest court.

Continued calls into the Senate will help hold the line. You can see how your senator is planning on voting here, both on Gorsuch and on the rule change.

Then make a call asking your senator to stay strong against Trump's nominee and blowing up the rules of the Senate.

Dial 1-866-943-8027 or text SCOTUS to 69866 to call your senator and tell them to oppose Neil Gorsuch's confirmation and any rule change that would allow his nomination through.

Gorsuch on the Supreme Court would be a disaster for the environment for decades to come. His decisions show hostility to basic legal principles that let EPA protect our clean air and water. He refused to answer basic questions about whether he believes EPA has the authority to take action on climate change. He thinks corporations are people and will protect them-- siding with them 91% of the time in his decisions!

He was the only judge who sided with the trucking company against Alphonse Maddin, the "frozen trucker" who chose to get warm and save his own life when his company told him to stay put in sub-zero weather in a broken truck with no heat. He sided with a school that gave only minimal accommodations to an autistic student, a decision overturned 8-0 two weeks ago by the Supreme Court. And he helped write the infamous Hobby Lobby decision.

Thanks for making a call,

I am calling as a Sierra Club supporter to urge Senator McCain/Flake to reject Judge Neil Gorsuch for the Supreme Court of the United States. Neil Gorsuch repeatedly ruled for corporations over people. If he cannot get 60 votes of support, we should change the nominee, not the rules. Thanks for your time and please let the senator know that I urge them to oppose Judge Gorsuch for the US Supreme Court."
Posted by Jana Segal at 12:46 PM