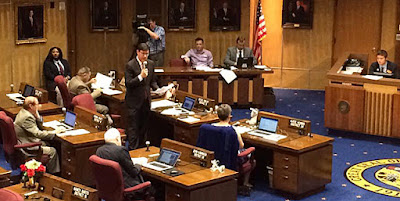 I got this e-mail from Friends O'Farley…

Last Thursday sent a shockwave through students, teachers, and parents — Republicans, Democrats, and Independents alike — all over the state. After politically threatening holdout Republicans, Governor Ducey rammed SB1431 — the statewide private school voucher bill — through the legislature and signed it into law that night.

The first people to tweet congratulations to the Governor were Jeb Bush and President Trump’s Education Secretary Betsy DeVos. It’s clear that, in privatizing our public school system, Doug Ducey is serving his DC friends, not AZ kids.

This is marks the beginning the wholesale privatization of our public school system, which can only be reversed by unseating the Governor and the legislative majority at the next election.

Read on for the details of this disastrous policy. Here is my floor speech, delivered last Thursday during the debate over SB1431:

Governor Ducey, I know you are listening, so I'm talking to you.

You call yourself an education governor. But you first came to prominence in our state as the leader of a successful effort to slash a billion dollars a year from our public schools.

Then you swooped in with a plan to save our public schools from the financial hole you originally created for them - Proposition 123.

Prop 123 took money from the future that was already set aside for schools in order to pay for the present desperate needs that you had created. It amounted to 70% of inflation and enrollment growth.

Which had already been ordered by voters 17 years ago to be paid and had not been paid since 2008.

And I see the results in my daughter's school, Tucson High.

> 10% of the classrooms are locked away because they are hazardous to inhabit and there is no money to fix them.

> The average age of computers is 12 years old, and there are not enough for more than one third of the students. Because of lack of computers, AZMerit testing is a logistical nightmare and students not being tested are attending three-hour classes while others test.

> Teachers with eight years experience and a masters degree are earning $37,000 a year.

Our entire system is in crisis.

Throughout the Prop 123 campaign, Governor, which I supported because it was all you left for us to support, you kept saying you were committed to Step 456. You never said exactly what that was.

Now we have before us your Step 456, and it is utterly shocking. You are proposing the wholesale privatization of our public school system.

This is nothing less than a tax of $5,400 a year on each public school student, redistributed as debit cards to the parents of other students who are rich enough to afford the extra $10,000 to $15,000 a year in tuition to attend a private or religious school.

Governor, you may say that this is about choice. But currently, 94% of Arizona parents choose to send their children to public schools.

Once you have gutted those public schools through your education policies, capped off by this one, those of us who have chosen to send our kids to public schools will be left with no good choice.

Either leave our kids at a neglected school with decaying resources, or beg, borrow, or even seek predatory lenders to scrape up the rest of the tuition to try to send our kid to a private school, which can turn away kids for any reason and will be filling up to capacity with students fleeing from the public schools you have gutted.

With this bill, on top of your other education policies, you are paving the way toward this dystopian future of dwindling opportunity and a widening chasm between the haves and the have nots.

Governor Ducey, you have resorted to wielding intense pressure and political threats to members of this body who have stood strong up to this point and voted their conscience. That is wrong.

You are ignoring the outcry of millions of Arizona citizens who need a foundation for the future and parents who choose public schools for their children. That is wrong.

You are dismantling the most effective tool we have ever built for lifting people out of poverty and delivering opportunity. That is wrong.

You are pushing a bill that will destroy Arizona public education as we know it. That is wrong.

I urge you, Governor Ducey, and urge all the members of this body, to reject SB1431.

—> Sadly, the Governor did not take my advice. SB1431 bill passed by the bare minimum of 16 votes in the Senate and 31 votes in the House, then was signed by Governor Ducey to cheers from his DC friends and jeers from AZ parents.

Several of the Republicans who had previously stated opposition to the statewide voucher scheme hadflipped after the Governor threatened to veto their bills and leave nothing for their districts.

One of the holdouts, Senator Bob Worsley, negotiated a cap of no more than 30,000 children eligible for the vouchers by 2022. That won his support. But as I pointed out on the floor, the cap could disappear with a one-line provision in the upcoming budget in the middle of the night, or at any other time.

Sure enough, before the ink was dry on Governor Ducey’s signature that very night, the right-wing Goldwater Institute sent out a fundraising email where they bragged, “There is a cap at 5,000 new kids per year; we will get it lifted."

While the speed and brazenness of this braggadocio was breathtaking, it was hardly surprising. The Goldwater Institute has eliminated caps and restrictions on these voucher programs each of the 11 years I have served in the Legislature. This program was characterized at the start as just a tiny program to help a very limited group of severely disabled kids. Several steps later, all 1.1 million students in the state are now eligible — presuming their parents have the cash to pay for the rest of the tuition.

The Goldwater Institute’s stated goal is the complete privatization of public education. They are now well on their way.

—> On another vitally important topic, health policy, Governor Ducey is struggling with his understanding of the issue. He came out with this amazing statement yesterday on the Mac and Gaydos show on Phoenix’s KTAR radio:

A) Medicare is "government healthcare" last I checked.

Perhaps we could use a governor whose understanding of health policy goes beyond simply attacking Obamacare?