No drilling for oil in the Arctic Refuge!

The oil industry’s allies in Congress hope to take advantage of a pro-drilling president and Republican control of the House and Senate by opening the Arctic National Wildlife Refuge for oil drilling. Industrial infrastructure and the resulting spills would permanently scar this landscape.

This cannot be allowed to happen. Please take a moment to urge your senator to get on board and oppose drilling in the Arctic Refuge.

This week, a historic number of senators and a bipartisan group of representatives introduced bills in the Senate and House to protect the coastal plain of the Arctic Refuge as designated wilderness. Unfortunately, your senator was not among them.

As one of our last pristine, untouched landscapes, the Arctic Refuge is a national treasure. The coastal plain is the biological heart of the refuge, providing denning habitat for endangered polar bears and the calving ground for the Porcupine Caribou herd. We have a moral obligation to protect it for our children and grandchildren.

Urge your senator to oppose any executive or congressional action that would open the Arctic Refuge to oil drilling. 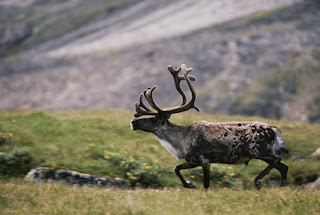 Email ThisBlogThis!Share to TwitterShare to FacebookShare to Pinterest
Labels: No drilling for oil in the Arctic Refuge!