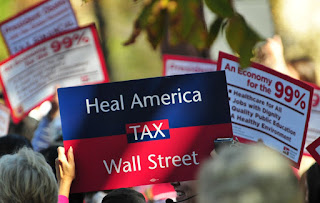 Tax Day is a time when individuals and small businesses do our part to fund public education and healthcare, safe communities and reliable transportation systems, and so much more. It’s our patriotic duty. But while we’re paying our fair share of taxes, Wall Street banks are using a rigged system to avoid paying billions of dollars in taxes each year.

Between 2008 – 2015 the nine largest and most profitable U.S. banks avoided paying about $80 billion in federal income taxes by using various loopholes their lobbyists helped get put into the tax code. And Donald Trump’s tax plan would make it even worse.

*The corporate tax rate would be slashed from 35% to 15%―saving the six largest U.S. banks a combined $12 billion annually.

*Banks that stash huge profits offshore would be allowed to bring those profits home at a fraction of the price―saving the six largest U.S. banks an estimated $25 billion in taxes.

*Hedge fund managers and Wall Street CEOs would see a two-thirds cut in their individual tax rates―equaling a $1.5 trillion tax giveaway mostly to Wall Street billionaires and the richest 1 percent.

Tell Congress that it’s time for Wall Street to pay its fair share!

Sample e-mail to your Congress members...