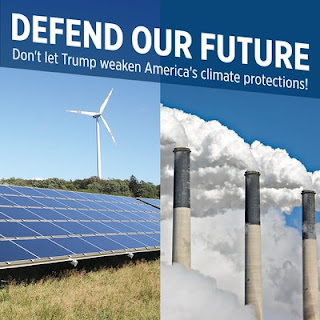 Donald Trump has issued Executive Orders demanding the EPA and other government agencies move backwards on all of the progress we've made to protect the climate over the past several years. Agencies are being ordered to ignore the impacts of carbon pollution, begin leasing coal mining rights on federal land, and -- perhaps worst of all -- the EPA is being ordered to dismantle its landmark climate protections, the Clean Power Plan.

Once again, we find ourselves with an out-of-control Trump Administration ignoring science, public opinion, and sound public policy to help their buddies in the fossil fuel industry. We can't let them get away with this. And that's why we have you.

Only an outpouring of public outrage can help turn the tide and defend the climate. We've seen it happen with the attempted Muslim ban, and we saw it last week with the disastrous attempt to repeal health care reform.

The good news is, Trump can't just wish the Clean Power Plan away. Over a million Americans submitted public comments supporting it, and thousands rallied and testified at listening sessions and public hearings. EPA will have to go through the same process to turn back the clock.

EPA is also obligated to reduce carbon and other climate-disrupting pollutants because of their previous "endangerment finding" and orders from the Supreme Court, like in Massachusetts v. EPA.

Trump and Pruitt will try to pull a fast one with the climate, but we won't let them. Send a message to them now demanding they keep the Clean Power Plan in place or replace it with something that reduces carbon emissions even more. Stand up, together, and we can defend our progress on climate change and continue our climate leadership. -The Sierra Club

Sign the petition now.
Posted by Jana Segal at 8:29 AM