GI Bill bait and switch! Tell your congress members that troops should NOT be taxed for GI Bill. 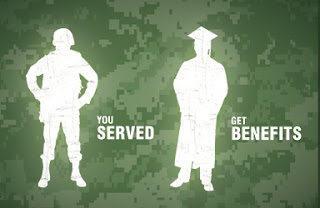 Congress is currently considering changes to the GI Bill which would force new enlistees to increase the amount they are paying to access their education benefits. As U.S. Army veterans, we think this is a horrible idea. Help us stop the bill that increases how much soldiers pay for their benefits DOA in the House Committee on Veterans' Affairs!

As the subcommittee holds their initial hearings on revising the GI Bill, they must remember that our soldiers are paying for these benefits with their service to our nation. It’s unfair and un-American to increase charges to those who are already making great sacrifices to keep our nation safe.

Congress is in a rush to finish a bill by Memorial Day and return to their districts and loudly trumpet how much they support the troops - but any efforts to move this bill forward by agreeing to increased fees on vets must be a non-starter. You can't support new taxes on soldiers' benefits while claiming to support our troops.

Crystal Bergfield, a U.S. Army Veteran sees it this way:
I joined before the switch to the 9-11 GI Bill. I used the Montgomery GI Bill which took $100/month out of my paycheck. When I joined, I was told I could get my current loans paid off or I could receive the GI Bill for future college tuition and fees. They told me and all of the rest of my battle buddies, that the GI Bill was free. Then I got my first paycheck and saw that they charged me for the Bill! It's outrageous and wrong that the military forces us to pay for a benefit, advertised as FREE, before we even have access to the benefit.

Our military, while providing many benefits to our country and our service members, is stealing money from 18 year olds, who make so little while making great sacrifices each day for our nation. While I agree that budget cuts need to be made, starting with the education of the future of the United States is not the sign of an intelligent nation. Don't increase the fees on the GI bill!

Dustin Judice, an Army veteran of Operation Iraqi Freedom 07-09 with 3rd Armored Cavalry adds:
I completely agree with Crystal, any new fees on newly volunteering service members is a tax on the troops. My understanding is that any college scholarship after the Montgomery GI Bill would not have a deduction attached to it. Part of the difference is that no money for the new Post 9/11 GI Bill - except for living expenses - passes thru the veteran's hands. With the Montgomery GI Bill the money came to the veteran and it was theirs to spend as they choose. The new GI Bill does not do this.

Additionally, I think that a veteran choosing to give up their life in defense of their country is a sacred social contract between the soldier and our nation. Any future fees assessed after enlistment or not mentioned explicitly in commercials is a bait and switch tactic and an insult to the nation and the soldiers. I do not and will not support a new fee assessed on the Post 9/11 GI Bill.

For more information on the effort to reauthorize the GI Bill, read this article in Task and Purpose.

Sign the petition and call your congress members now!
Posted by Jana Segal at 8:09 AM