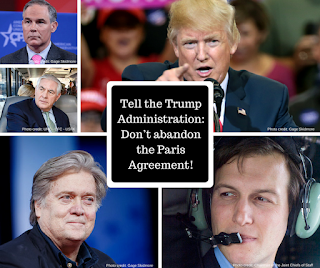 After mounting pressure from people on both sides of the aisle, the Trump Administration abruptly postponed its meeting on the Paris Climate Agreement last week.

But now -- it's back on!1 News reports say key advisors will now meet on Thursday to debate next steps on the Paris Climate Agreement. This could mean backing out of the agreement altogether or significantly weakening our climate commitments.

The pressure is working, but we must keep it on! Please join the more than 30,000 Sierra Club supporters who have already taken action.

Let's send a strong message that Americans want the U.S. to keep its climate promises.