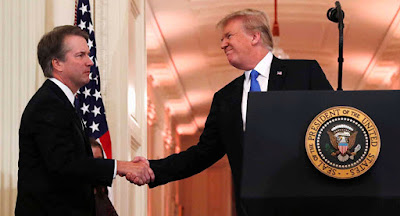 The fight to #SaveSCOTUS from Trump’s next Supreme Court Justice nominee is no longer speculative. Last night, Trump announced his nomination to replace Justice Anthony Kennedy on the Supreme Court: Brett Kavanaugh. (Click here to read our latest resource on why Kavanaugh should be stopped.)
Kavanaugh is one of the most cravenly partisan choices Trump could have made. He’s been called the “Forrest Gump of Republican politics,” as he seems to always show up in high-stakes, far-right political battles and conspiracy theories. In fact, his “excessive partisanship” delayed his confirmation to the DC Circuit in 2003 by not one, not two, but three years, and only then passed by a 57 to 43 vote. His long, partisan history even had Mitch McConnell scrambling to encourage Trump to make another pick just three days ago. We. can. win. this.
We’ve teamed up with with MoveOn, Demand Justice, NARAL Pro-Choice America, Ultraviolet, National Center for Transgender Equality, United We Dream, Planned Parenthood Action Fund, CREDO, and other national progressive organizations to call for a week of action to #SaveSCOTUS.
Yesterday, we kicked off our week of action with in-district visits across the country. Outlined in our 2-Step Strategy to Win the Supreme Court Fight, the only way we can defeat Trump’s nominee is to make sure every single senate Democrat (and likely two Republicans) commits to a ‘no’ vote. Show up at your senator’s office and let them know that you’re paying attention.

How you can join us to #SaveSCOTUS.

1) Find a #SaveSCOTUS Senate District Office event near you on our event map.
2) If you don't see one, register your own. There’s still time.
3) Can’t make it to a district office in-person? You can still call your senatorand make your voice heard.
Let’s be clear: this is a pick that will shift the court’s balance and reshape our country for generations to come. And only through intense pressure from constituents will senators understand what’s at stake and what they need to do. McConnell has said he’d like to vote on Trump’s Supreme Court pick by the fall. But first, it has to go through the Judiciary Committee, a confirmation vote in the full Senate… and you.
All eyes will be on this nominee -- and the response from grassroots activists like you. No senator will be able to lay low on their position. That makes this -- today, tomorrow, all week long -- the perfect moment to begin pressuring our senators to make the right decision and commit to opposing Kavanaugh.
This is just the beginning. There are will be many flashpoints in the weeks ahead where we’ll need to be all hands on deck. We’ll be fighting tooth and nail to keep this extreme nominee from being seated on the court. Using the same grassroots opposition that stopped TrumpCare in spite of impossible odds, we will make it clear to both Democrats and Republicans that a ‘yes’ vote for Brett Kavanaugh is a vote to gut our rights and undermine our democratic institutions.
- The Indivisible Team
Posted by Jana Segal at 2:38 PM