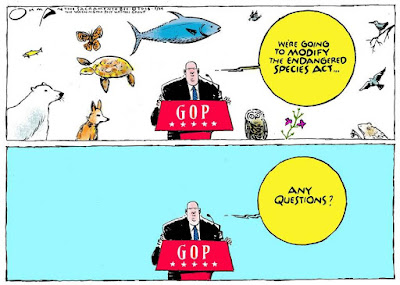 Bills that could seriously weaken the Endangered Species Act are making their way through both the House of Representatives and the Senate. The proposed plans would make it harder for species to get protection under the Act and make it easier to strip species of their protected status. These changes would strip protections from the gray wolf, the sage grouse and the American burying beetle.

Another proposal, a rule change from the Department of the Interior, would allow economic interests, like those of the fossil fuel industry, to be taken into consideration when deciding if a species should be granted protections.

If successful, these rollbacks would not only drive American plants and animals towards extinction, they would also open up vast areas of land to extracting fossil fuels. The coal, oil and gas industries are lobbying for these changes, but if we want to fight climate change, we need to keep those fuels in the ground.

This week, we can act on climate by contacting our elected officials and asking them to oppose efforts to weaken the Endangered Species Act. When you call, you can say something like this:

“Hello, I’m calling to urge [YOUR OFFICIAL’s NAME] to oppose efforts to weaken the Endangered Species Act, including rules that would allow corporate interests to be considered when deciding if a species should receive protections. Thank you.”