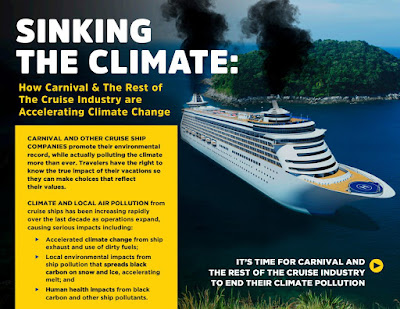 The shipping industry is one of the fastest growing sources of climate pollution on the planet.
As the largest player in the cruise industry, with ten brands worldwide offering trips to some of the most beautiful and fragile ecosystems on earth, Carnival Corporation has a responsibility to both the people it serves and the planet to be a leader in clean ships. Instead, its Carnival cruise line alone has increased its climate pollution nearly 20% in the last decade.
Globally, the shipping industry is on track to become a leading climate polluter if it doesn’t change its ways.
Click here to let Carnival know that polluting the climate is not acceptable - petition their CEO today!

To:  Carnival Corporation CEO Arnold Donald
Dear Mr. Donald,
Carnival is the world’s largest cruise company -- but one that is failing to protect our climate and the Arctic. Your use of heavy fuel oil (HFO) contributes to an accelerated pace of Arctic sea ice melt due to significant soot emissions, puts this delicate ecosystem at unnecessary risk of an irreversible environmental catastrophe in the event of an HFO spill, and threatens Indigenous Arctic communities’ lives and livelihoods.
While Carnival publicizes its environmental initiatives and values, as CEO you have made no commitment, much less adopted a plan, to reduce your company’s total climate pollution. The initial measure you have taken to increase fuel efficiency is a good first step. However, increased efficiency falls far short of climate protection. The reality is that even as you have increased efficiency, the total greenhouse gas (GHG) emissions for the Carnival Cruise fleet have increased by nearly 20% over a decade. Without a deliberate plan for total GHG reductions, this upward emissions trend will continue. I can’t accept that, and neither should you. Rather than being a part of the problem, it’s time for Carnival to lead the way in clean shipping solutions! That’s why
I’m  urging you to:
The places we all love depend on it!
Sincerely,
Posted by Jana Segal at 10:40 AM