Urge your senator to oppose Brett Kavanaugh’s nomination, because the President shouldn't be above the law 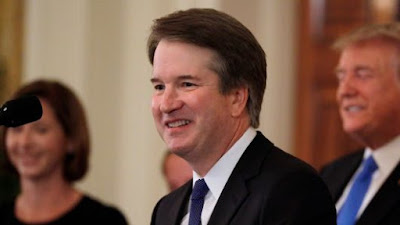 Foreign companies shouldn’t be able to spend money in our elections.

Supreme Court nominee Brett Kavanaugh doesn’t agree with that basic principle – and now a Russian company indicted in February as part of Special Counsel Mueller’s investigation is trying to use a decision written by Kavanaugh to get the case dismissed.

That’s just one of Kavanaugh’s extreme views on our democracy. He has written that he believes the president is above the law, he would give wealthy donors and corporations more power in politics, and he even upheld a discriminatory voter suppression law in South Carolina.

Momentum is building to oppose Kavanaugh, but we need to make sure senators know exactly why he’s unacceptable.

Call your senators now at (202) 224-3121 and ask them to oppose Kavanaugh’s nomination because of his extreme views.

Here’s a suggested script for when you call:

“Hi, my name is _____ and I’m a constituent. I’m calling to ask Senator (NAME) to oppose Brett Kavanaugh’s nomination to the Supreme Court. I’m very concerned about his views on money in our elections, his belief that the president is above the law, and his past rulings on voting rights and foreign money. Please oppose his nomination. Thank you.”

Concord Management and Consulting was accused of failing to register as a foreign agent and report its election-related expenditures to the government. Now the company is using Kavanaugh’s decision in a case involving the Foreign Elections Campaign Act to try to get the case thrown out. Kavanaugh’s decision left the door open for unlimited spending by foreign groups on “issue advocacy” – ads that most people would consider election spending, but because they do not explicitly say to vote for or against a candidate, Kavanaugh’s narrow reading would allow them.

We don’t need a Supreme Court justice who sides with the wealthy and powerful over the rest of us. We don’t need a justice who was handpicked by the same wealthy special interests that are now spending millions of dollars to make sure he’s confirmed.

After you call, help spread the word by sharing our blog post about Kavanaugh’s record.

*see other contact information for your senators at the top of the column to the right.
Posted by Jana Segal at 1:02 PM