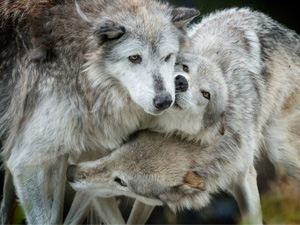 Congress is back at it with another damaging attack on Endangered Species Act protections for gray wolves.

A new Senate Sportsmen’s bill, S. 1514, contains a damaging provision targeting gray wolves. This “War on Wolves” legislation would block federal protections for wolves in four states and allow them to be trophy hunted, trapped and otherwise killed.

Call your U.S. senators now and tell them that you OPPOSE S. 1514 and all other attacks on protections for gray wolves.

If this “War On Wolves” legislation passes out of Congress and is signed by President Trump, it would hand the fate of wolves in Minnesota, Michigan, and Wisconsin over to states whose wolf management plans were ruled illegal under the Endangered Species Act. This damaging legislation would also strip citizens of the right to challenge these lethal Midwest programs in court. It would also block citizens’ rights to challenge the management of wolves in Wyoming, where wolves are currently subject to a hostile state management program that allows for unlimited shoot-on-sight killing of wolves across 85 percent of the state.

Wolves have just begun to recover in some areas of the continental United States after being nearly wiped out by centuries of ruthless hunting, trapping and poisoning. Despite fragile successes that have brought wolves back to the northern Rockies and the Midwest, they are still missing from a vast majority of their former range and are subject to mounting persecution even where they have been restored.

If anti-wolf members of Congress get their way, the result will be more dead wolves and a blow to the Endangered Species Act, our nation’s safety net for imperiled species.

We must stand up for wolves and the law that helped bring them back from the brink of extinction—the Endangered Species Act.

Please call your U.S. senators now and ask them to oppose S. 1514 and all other attacks on protections for gray wolves.
Posted by Jana Segal at 8:11 AM