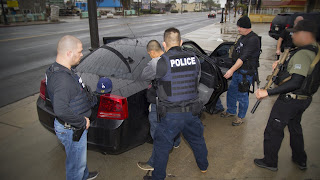 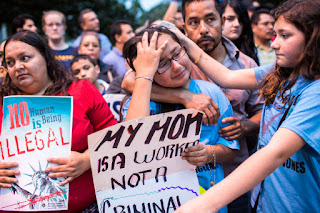 Less than two weeks before he was elected, President Donald Trump told the country, "We have some bad hombres here, and we're going to get them out."

Jorge is not one of them. But just five days after the birth of his daughter, U.S. Immigration and Customs Enforcement agents came to "get him out" anyway.

Without him, Jorge's wife, Rita, has no income – no way to pay rent, buy food, or provide for their three children. ICE agents left Jorge's family alone when they arrested him without so much as making a call to domestic support agencies, which is routine for local police.

In May, SPLC staff writer Will Tucker traveled to Greenwood, Mississippi, to talk to a priest who has been advocating for Jorge's family and others like them. Father Michael McAndrew knows that Spanish-speaking families in the area are "soft targets" for ICE.

"Throughout this case, I have been upset that ICE could pick up a person and not address the care of a five-day-old child," wrote McAndrew in a letter to U.S. Rep. Bennie Thompson. "I call what they did child endangerment."

In addition to Thompson, McAndrew has contacted lawyers and ICE agents about putting a hold on Jorge's deportation. But, as Tucker writes,
Arrayed against Jorge, Rita and their children is the force of the federal government, embodied by agents impervious to appeals for decency and seemingly determined to drive the family into poverty – or, at least, out of the country.

And as McAndrew notes, "What's happening to Jorge [and Rita] has happened to so many other people."

That's why we recently launched the Southeast Immigrant Freedom Initiative. SIFI aims to ensure that skilled attorneys are available to represent detained immigrants pro bono, protecting their due process rights and — simply by giving them counsel — making their cases far more likely to succeed. We know families are depending on it.

- Southern Poverty Law Center
Posted by Jana Segal at 9:01 AM