In January, Trump formed an illegal "Infrastructure Council" — a.k.a. a massive corporate giveaway and attempt to sell American water systems, bridges and roads to the highest bidder. And *surprise* the Council's co-chairs (and real estate developers) Richard LeFrak and Steve Roth both stand to profit significantly off the deals they’re crafting. It's not only wrong — it's illegal.

We won't let Trump and his Wall Street friends sell off our public infrastructure for profit. 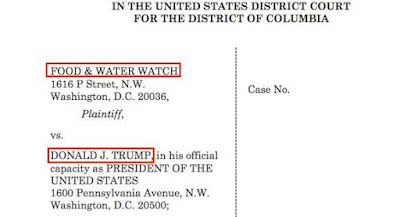 Our nation desperately needs federal investments in infrastructure. The lack of investment in our public water systems over the decades has led to unaffordable water service rates, and in some places, to water that’s unsafe to drink or bathe with. I've seen too many families over the years worry about whether the water coming out of their tap is safe to give to their child. People deserve better than this.

Yet Trump wants to take advantage of this need to spin deals for his buddies on Wall Street.

For years, Food & Water Watch has partnered with communities to lift up the voices of those impacted by our crumbling infrastructure and demand real solutions. Communities deserve a right to have a say in how their infrastructure is maintained – and to know if Trump is making his friends even richer by building it.

We believe that President Trump’s "Infrastructure Council" has operated in violation of the Federal Advisory Committee Act ever since he created it in January 2017. We're suing Trump to void all actions taken by his “Infrastructure Council” and to compel the Administration to disclose the role its financially conflicted co-chairs have played in shaping the President’s infrastructure policy.

The answer to our problems is NOT to sell off our roads, bridges and water systems to the highest bidder.

Done the right way, we can rebuild our crumbling infrastructure while spurring economic growth in rural areas, creating good-paying jobs in major cities, and ensuring that every American has access to paved roads, safe schools and clean water.

Food & Water Watch is proud to stand with communities across the country who are being impacted by decisions made in back-room deals. We don't take any corporate or government funding in order to stay uncompromised — a position that allows us to hold elected officials like Donald Trump accountable.