Petition to Defense Secretary Jim Mattis:
Because of Trump’s call for a trans military ban, transgender active duty members and veterans are at risk of losing their jobs, healthcare and veteran status. Further, the civil liberties and self-determination of transgender people to make their own decisions about military service is under threat. I stand in solidarity with the transgender community and call on the Pentagon to refuse to comply with Trump’s trans military ban.

Through a series of tweets Donald Trump put the healthcare and livelihood of hundreds of thousands of transgender active service members1 and veterans2 in jeopardy. 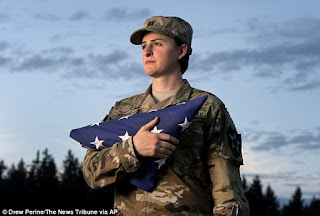 Right now, Trump’s proposed trans military ban is just a series of tweets. It’s up to Defense Secretary Jim Mattis to either fall in line with them, or push back as hard as possible.3

Trump’s decision is sharp reversal from the previous administration’s policy allowing transgender people to serve openly. And more than that, stomps on the civil liberties of transgendered people to make their own decisions about military service or transgender health care as a veteran.

To be clear, transgender people already face huge institutional barriers to health and happiness in this country.4 From employment, housing, healthcare, education, and even using public accommodations, too often trans people, and their protections under law, are ignored, neglected, or disenfranchised. And that’s on top of their disproportionate likelihood of being the victims of violent hate crimes and murder.

Trump is scapegoating an already vulnerable population – a play right out of every schoolyard bully’s and authoritarian dictator’s playbook. And his actions fly in the face of our civil liberties and core American principles.

Tell Defense Secretary Jim Mattis that you expect him to fight back against Trump’s hate-motivated transgender military ban.