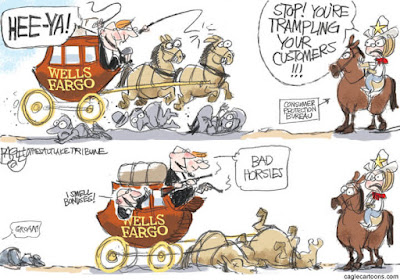 Let your member of Congress know you oppose H.J.R. 111, the “Arbitration CRA” >>
CALL YOUR REPRESENTATIVE AT 202-224-3121
When it was discovered that Wells Fargo employees created more than 3 million fake accounts under existing customer names without their permission, the resulting scandal broke the American people’s trust. The company’s actions, motivated by internal sales quotas, hurt consumers’ credit scores and charged fees for services they didn’t request.
Wells Fargo was able to avoid class-action lawsuits using the arbitration clause it had with its customers. To prevent that practice in the future and make sure we all have our day in court, the Consumer Bureau issued a rule that cracks down on these rip-off clauses and allows consumers to take their grievances before a court without being forced into a secret arbitration court run by the big banks. But now, just a couple weeks after this new rule was finalized, Wall Street-backed members of Congress are moving quickly to pass a Congressional Review Act (CRA) bill that would overturn this important rule and stack the deck in favor of big banks and against consumers. The House is rushing to vote on the legislation … TODAY!
Will you call your Representative right now and tell them to protect consumers and vote NO on H.J.R. 111, the Arbitration CRA?


CALL YOUR REPRESENTATIVE AT 202-224-3121
Just months after strongly condemning Wells Fargo for its “theft” from American consumers, Congressman Keith Rothfus (R-PA) joined Senator Mike Crapo (R-ID) in proposing this legislation, which would return power to the banks and could allow another Wells Fargo-type scandal to go unpunished.
Why? It could be because, together, Rothfus and Crapo have received more than $3 million in campaign contributions from big banks and other financial interests over the course of their careers. When will it stop? When will the politicians in Washington stand with consumers rather than the banks and Wall Street special interests that fund their campaigns? When we stand together and tell our Representatives to stop legislation like this!
Don’t let the Republican Congress take us back to the days when banks had free rein to rip off consumers. Call your Representative in Congress today at 202-224-3121 and tell them to oppose the H.J.R. 111, the Arbitration CRA!
- Karl Frisch. ALLIED PROGRESS ACTION
Posted by Jana Segal at 12:15 PM