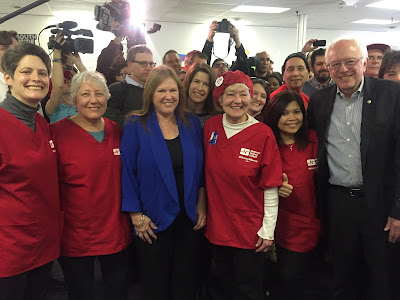 "I see patients every day who have to make the decision between affording their medications or affording to eat "- Erica, National Nurses United

With Congress currently focused on health care, the Sanders Institute wanted to broaden the discussion to go beyond insurance coverage to a debate about creating a healthy society, with our citizens as the focus. Leaving millions of people uninsured should not be the only option.

The Sanders Institute and National Nurses United delivered a research paper, titled Medicare For All vs All the Healthcare Each Can Afford, to every Senate and House of Representatives office on Capitol Hill. This report analyzes our current fragmented health care system and suggests a system of health care reflecting the nurses' values of caring, compassion and community. Some facts to consider:
The Sanders Institute believes a vital democracy requires an informed electorate, civil discourse and bold thinking. This in-depth report is a step towards those goals on a very important issue in our society.