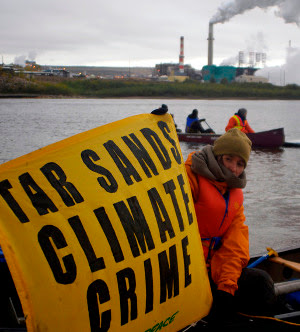 Tar sands oil is one of the dirtiest energy sources on the planet, producing up to 20% more carbon emissions than conventional oil. And four proposed pipelines, including Keystone XL, would carry that dirty fuel from Canada’s tar sands across thousands of miles of continent to refineries and ports in Canada and the U.S. They ignore the rights of sovereign Indigenous nations and private landowners and pose dire risks for communities along their paths. But imagine if we could stop these pipelines by cutting off their funding at the source. A pipe dream, you say? It’s already happening.

Just 26 global investment banks and lending institutions are responsible for the majority of funding for these proposed pipelines. U.S. banking giant, JPMorgan Chase, has contributed millions of dollars through various loans, credit facilities, and financial transactions.

And yet, JPMorgan Chase has publicly acknowledged that it must review its investments in the fossil fuel sector and that tar sands projects require an extra level of review and scrutiny. Despite these comments, it have fallen short on significantly changing its lending practices to be in-line with its climate and human rights commitments. It is time for JPMorgan Chase to put its money (or rather, not put its money) where its mouth is. Tell JPMorgan Chase to step up its commitment and to cut ties to the tar sands oil pipelines that only Trump and his fossil fuel backers want.

With your help, it can be done! The Dutch bank giant ING recently announced that it will not finance oil pipeline projects from the Canadian tar sands, placing climate, environmental, water, and social impacts among the chief justifications for its overall policy. This latest action by the bank comes after a letter was sent by twenty Indigenous and environmental groups, including Greenpeace, demanding that the bank publicly commit to end its financial relationship with the destructive tar sands pipelines.

Financial institutions are waking up to the growing movement against these pipelines and the reputational risk they face if they continue to throw their money and support behind these destructive pipelines.  Some have already washed their hands of oil pipeline projects. Keep up the resistance and send a message to JPMorgan Chase asking the bank not to fund dangerous tar sands pipelines that threaten communities and the climate.