Urge Sen. Flake and McCain to protect ACA while working towards a better plan 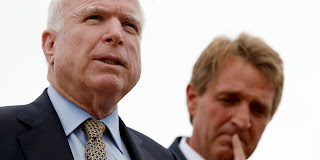 Earlier this week, two more Republican Senators announced they would oppose Trumpcare--ending any chance to pass it. And yesterday, Senate Majority Leader Mitch McConnell's proposal to vote this week on a full repeal of the Affordable Care Act (ACA)--with NO replacement at all--also failed.1 These are monumental victories, with thanks due to all of you who called, protested, and more.
But now, House Republicans are proposing to use the federal budget to severely cut Medicaid. And the Trump Administration announced it will defund the health care marketplace so that the ACA would "fail."2
Your Senators, Senators John McCain and Jeff Flake, have not yet committed to voting no on Trumpcare. We need to rack up as many NO votes as possible to show widespread support for the Affordable Care Act and pour cold water on these other attempts to destroy it. To do that, we need to show them that their constituents in Arizona expect them to PROTECT the Affordable Care Act by voting NO on repealing it. Can you make a call NOW?
Here's the number to call:
Will you make an urgent call to Sens. McCain and Flake now?
Speak in your own words, but here are some points to guide you:
- the UltraViolet tea
Sources:
1. Health Care Overhaul Collapses as Two Republican Senators Defect, New York Times, July 17, 2017
2. Health insurers plan big Obamacare rate hikes — and they blame Trump, Los Angeles Times, May 22, 2017
3. Medicaid’s Role for Women, Kaiser Family Foundation, June 22, 2017
4. Summary of the Affordable Care Act, Kaiser Family Foundation, April 25, 2013
Preventive care benefits for women, Healthcare.gov, accessed July 18, 2017
The Affordable Care Act’s Birth Control Benefit Is Working for Women, National Women's Law Center, December 2016
5. Ibid.