Tucson & Southern Arizona - Our Lives on the Line event 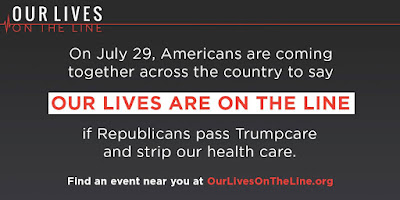 More than a dozen groups have joined forces to lead a national “day of action” against the Republican plan to repeal parts of the Affordable Care Act. This rally and press event in Arizona is one of many being held simultaneously in numerous other cities around the country that day.
“Our Lives On the Line, Arizona” event — including a flagship rally in Washington — will set the tone for several weeks of aggressive activism to persuade key lawmakers to back off their repeal efforts.

OFA's motto is Respect, Empower, Include, Organize. We lead with respect as a core value, and ask that all organizing work is done so with that value in mind. When participating in events like this one, you are committing to do so respectfully.
Posted by Jana Segal at 12:35 AM

Email ThisBlogThis!Share to TwitterShare to FacebookShare to Pinterest
Labels: Affordable Care Act, Our Lives on the Line Arizona event