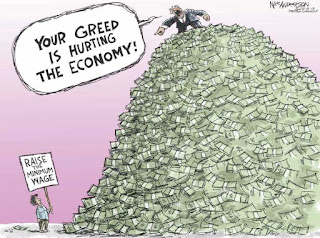 he administration released its spring regulatory agenda this week. Its proposals to rescind regulations that protect workers’ safety, paychecks, and retirement savings reflect an ambitious agenda that consistently puts corporate interests first. The administration’s proposals to reopen rules protecting workers from exposure to beryllium, making it easier for OSHA to track injury and illness on the job, as well as the overtime and conflict of interest (fiduciary) rules, put workers’ pay, retirement security, and safety at the bottom of their list of priorities.
The administration’s proposal also includes changes to the current regulations on “tip pooling. The National Restaurant Association, who praised this move, has lobbied for years to loosen these restrictions and give employers more control over workers’ tips. While there are few details in this proposal at the moment, it’s worth noting that the restaurant industry, where tipping is prevalent, is rife with labor violations. In a recent EPI study on wage theft, more than 14 percent of food and drink service workers reported being paid less than the minimum wage, while 6 percent of other leisure and hospitality workers reported the same. And nearly half of workers reporting wage theft in the ten most populous states worked in service occupations. Under these circumstances, a policy action that could hand even more authority over a worker’s tips to their bosses would not be a step in the right direction.
The Trump administration is also actively working to weaken or rescind the “fiduciary” rule (the rule that requires financial advisers to act in the best interest of their clients). The latest step in these efforts is a Request for Information that, among other things, requests input from the public about whether the department should delay parts of the rule past their already-delayed current implementation date of January 1, 2018. The delays the department has already instituted under the new administration mean that retirement savers will lose $7.6 billion over the next 30 years. Each year of further delay will cost retirement savers an additional $7.3 billion dollars over the next 30 years. Given the large, persistent losses by retirement investors that would result from further delay, we oppose a delay of any length of the full implementation and enforcement of the rule.
Meanwhile, Trump’s Labor Secretary Alex Acosta is speaking this week at the annual meeting of the corporate-backed lobbying group the American Legislative Exchange Council, which has displayed its anti-worker agenda by pushing its model law called the “Living Wage Mandate Preemption Act.” The model law is designed to urge state legislatures to take away the minimum wage increases passed by city governments, such as the St. Louis minimum wage that will sink from $10 back down to $7.70 per hour when Missouri’s preemption law goes into effect this August.
Senate advances confirmations of NLRB members
Earlier this week, the Senate HELP Committee voted to advance the president’s nominations of Marvin Kaplan and William Emanuel to the National Labor Relations Board, and the committee may soon also decide how to proceed with the nomination of Patrick Pizzella, Trump’s pick for Deputy Secretary of Labor. Pizzella is a controversial nominee, having worked closely with disgraced lobbyist Jack Abramoff to allow for goods produced under slave-labor conditions in the Northern Mariana Islands to receive “Made in the USA” labels.
- Economic Policy Institute
Posted by Jana Segal at 6:22 AM