What if it comes down to Senator Flake's vote? 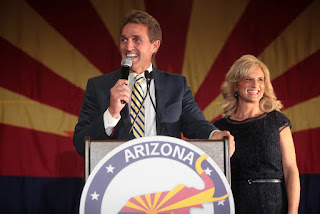 Because of the work by activists around the country, Senate leadership was forced to postpone the health care vote until after the 4th of July recess.1
But we can't rest--right now is literally the most critical time in this fight so far. Senate Majority Leader Mitch McConnell is working around the clock to convince senators who are on the fence and offering concessions to allay their concerns. Some senators have said those negotiations are close to winning them over. If we don't speak out now, Trumpcare could be on the president's desk waiting for his signature right after the congressional recess.
Thanks to grassroots pressure--massive protests, rowdy town halls, phone calls flooding their switchboards, and even constituents occupying their offices--Republicans have had to slow down.
But here's the thing--if we don't keep showing up, Republicans may think they can pass this horrible bill under the radar.
This bill is rotten to its core. It would deeply cut Medicaid, make insurance less affordable for everyone, defund Planned Parenthood, and make it harder for people with pre-existing conditions to get the coverage they need. According to the Congressional Budget Office, Trumpcare would mean 22 million more uninsured people by 2020.2 In a word--it’s heartless.
Speak out now!
- the UltraViolet team
Sources:
1. Vote Delayed as G.O.P. Struggles to Marshal Support for Health Care Bill, New York Times, June 27, 2017
2. H.R. 1628, Better Care Reconciliation Act of 2017, Congressional Budget Office, June 26, 2017

What if it comes down to Flake's vote?
Posted by Jana Segal at 10:03 AM