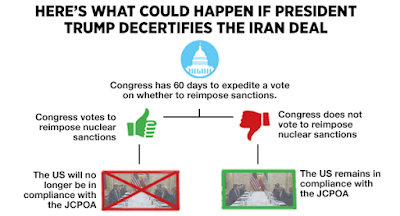 This is it. This is the month we’re going to go all out in our fight to save the Iran nuclear agreement -- and stand up for diplomacy that makes us safer and avoids war.

President Trump has threatened to kill the nuclear deal many times -- but now, the prospect that he will actually try to do so has never been more real. The president has until October 15th to certify to Congress that Iran is complying with the deal -- and there are many alarming indications that he will refuse to do so.

If Trump ignores the advice of his own top security advisers and refuses to certify, then Congress will have a 60-day window during which to hold an expedited vote to reimpose nuclear sanctions on Iran. If a simple majority in both houses vote for those sanctions, they’ll pass -- and the US will have violated and effectively withdrawn from the deal.

We can’t let that happen. In the lead up to Trump’s decision, we have to do everything we can to make clear that killing this deal would be a disaster for the US and for Israel. But if the deal does come up for a vote in Congress, we have to convince at least 51 senators that the US should NOT violate the agreement. Here’s what it looks like:

That congressional battle won’t be easy. But at J Street, we have years of experience as a leading voice and advocate in the fight to reach and defend this agreement. We’ve faced difficult odds and powerful opponents -- but we’ve never given up or backed down. Working with our many partners and allies, we have the tools and the arguments we need to win.

The experts -- from the current chairman of the Joint Chiefs of Staff to Prime Minister Netanyahu’s own former National Security Advisor Uzi Arad -- agree with us. So do a large majority of Americans.

Uzi Arad will explain why he believes the Iran deal is good for Israel and global security during a briefing call TOMORROW (October 2) at 12pm Eastern. Register now.

They know that to continue blocking Iran’s path to a nuclear weapon, to build a more peaceful world and to avoid another disastrous and costly war, we need to maintain this vital agreement. Nothing less than the future of American leadership and the stability of the world is at stake.

- Jessica Rosenblum, J Street
Posted by Jana Segal at 10:11 AM