Secretary Ryan Zinke is “muzzling scientists." Tell Zinke it's time for him to resign. 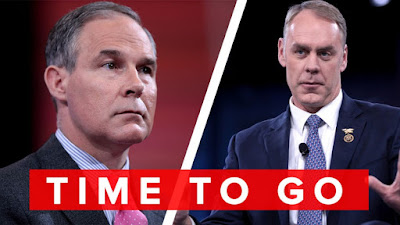 Climate scientists and whistle-blower Joel Clement just resigned from the Department of the Interior.
Clement wrote in his resignation letter: "[Secretary Zinke] and President Trump have waged an all-out assault on the civil service by muzzling scientists and policy experts like myself."1
Back in July, Clement was reassigned from his role after speaking out about the impacts of climate change on Alaska Native communities.2 He was transferred to the office that collects fossil fuel royalty payments. What better place to stuff a climate scientist as retaliation, right?
And he wasn't alone: Joel Clement is just one of approximately 50 top managers at the Department of the Interior who have been suddenly reassigned to new jobs by the Trump administration.2
Tell Secretary Ryan Zinke his abuses of taxpayer dollars and retaliation tactics towards environmentalists are unacceptable and it's time for him to resign.
When Clement first invoked the whistleblower protections he accused the Department of wasting taxpayers' money.
Since then, two investigations have begun into Zinke's conduct in the department -- one by the Office of Special Counsel and one by the Interior Department's Office of the Inspector General.1
And just last week, it has come to light that Secretary Zinke has been using taxpayer dollars to fund charter and military planes, and mixing official trips with political appearances -- one trip cost taxpayers $12,375 according to a Department of the Interior spokeswoman.1
Although Clement has said he will continue to fight for our planet, Zinke's tactics are robbing America, and frankly the world, of dedicated scientists working to solve the climate crisis we are facing.
Send your message to Secretary Zinke today and tell him you won't stand for his retaliatory acts against environmentalists -- it's time for him to resign.
- The SierraRise team
Sources:
1. Rein, L. (2 Oct. 2017). "Federal watchdog opens probe into travel by Interior Secretary Ryan Zinke." Washington Post.
2. Clement, J. (19 July 2017). "I'm a scientist. I'm blowing the whistle on the Trump administration."Washington Post. 3. Eilperin, J. and Rein, L. (16 June 2017). "Zinke moving dozens of senior Interior Department officials in shake-up." Washington Post. 4. Shankman, S. (5 Oct. 2017). "Whistleblower Quits with Scathing Letter over Trump Interior Dept. Leadership." Inside Climate News
Posted by Jana Segal at 11:34 AM