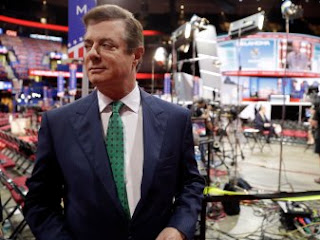 With the arrest of Manafort and his business associate Rick Gates, we’re more concerned than ever that President Trump may fire Mueller, so we need to speak up.

Congress must take action IMMEDIATELY to ensure Trump can’t interfere in Mueller’s investigation. Call your lawmakers today at (202) 224-3121!Here’s a suggested script for when you call:

The American people deserve answers about Russian meddling in our elections -- and whether or not President Trump, his campaign or his associates were involved or obstructed justice to cover it up. Please co-sponsor the Special Counsel Integrity Act and the Special Counsel Independence Protection Act (S. 1735, S. 1741, & HR 3771), the bipartisan legislation to protect Mueller’s investigation and that of future Special Counsels.

We need Congress to act quickly on this legislation and make it clear to President Trump that he is not above the law.

-David Donnelly, Every Voice
Posted by Jana Segal at 1:29 PM