Urge high-priority senators to stand up to Mitch McConnell and protect the senate tradition of blue slips! 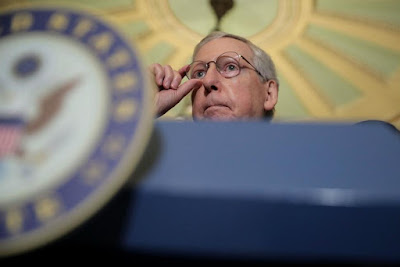 Donald Trump has a reliable ally in Senate Majority Leader Mitch McConnell who has repeatedly changed the rules to recklessly ram his agenda through the Senate. This time McConnell is threatening blue slips in order to confirm as many dangerous Trump judicial nominees as possible.

The blue slip process is a longstanding Senate tradition where senators must return their blue slip in order for a judicial nominee from their state to advance in the confirmation process. If a senator withholds their blue slip due to serious concerns about the nominee's qualifications for a lifetime court appointment, then the nominee does not move forward. McConnell is frustrated with Democrats doing their jobs and giving thorough consideration to judicial nominees -- so he's threatening to do away with the tradition altogether. He and Trump are ditching the checks and balances that protect our democracy.

Can you call Senators John McCain and Jeff Flake and urge them to stand up to McConnell's tyrannical attempts to undermine the blue slip?

McConnell needs to know that members of his party are feeling pressure from constituents on this important issue, and that he can't just change Senate traditions to keep Trump's extreme agenda moving. Judicial nominees are appointed to lifetime seats and have the power to make real and lasting change in people's lives... so decisions about their nominations should not be made lightly, and the rules shouldn't be broken to stack the courts with right-wing extremists.

Please take a minute to call Sens. McCain and Flake now and demand they protect the integrity of the Senate and its traditions

Hello, my name is ____ and I live in TUCSON. 85712
I’m calling regarding Senate Majority Leader Mitch McConnell’s attempt to end the blue slip process. This process protects constituents like me from the impacts of extremists on the federal bench. I want Senators John McCain and Jeff Flake to resist McConnell’s actions and protect the integrity and traditions of the Senate.
Thank you.

- Katie O'Connell
People for the American Way
Posted by Jana Segal at 1:21 PM