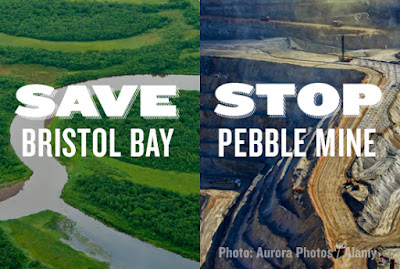 The Trump administration is paving the way for the disastrous Pebble Mine — the toxic, gold and copper mega-mine that poses catastrophic risks to Alaska's spectacular Bristol Bay and its world-renowned salmon runs, abundant wildlife populations, and Native communities.

President Obama’s Environmental Protection Agency proposed common-sense restrictions that would have banned this dangerous mine because of the obvious environmental risks it would pose, like generating a staggering 10 billion tons of contaminated mining waste that would have to be stored forever—in a seismically active area.

But President Trump’s EPA recently reached a backroom deal with Northern Dynasty Minerals — the Canadian company behind the mine — to reverse those restrictions. The EPA’s decision is a handout to the mining industry at the expense of one of America’s last wild places and its people. We can’t let it stand.

Tell President Trump and the EPA you’re outraged that they would put the profits of foreign mining companies ahead of the American people — and that you’ll fight them every step of the way until they slam the door on the Pebble Mine and protect Bristol Bay, its wildlife, its economy, and its communities from destruction.

Your message will be sent to:

Subject line:  Stop the Pebble Mine

(Consider adding your own thoughts — personalized messages are especially effective)

I am outraged that you plan to reverse course and green-light the proposed Pebble Mine, despite the catastrophic risks it poses to Alaska’s Bristol Bay watershed, its world-renowned salmon runs, and its Native communities.

President Obama’s Environmental Protection Agency proposed common-sense restrictions that would have banned this dangerous mine because of the obvious environmental risks it would pose. The EPA’s recent settlement with Northern Dynasty Minerals to reverse those common-sense restrictions is a blatant giveaway to the mining industry at the expense of the American people, our environment, and our economy.

Bristol Bay's wild salmon fishery supports 14,000 jobs and is valued at more than $1.5 billion annually. It also supplies nearly half of the world’s sockeye salmon. More than 65 percent of Alaskans, 80 percent of Bristol Bay residents and Native communities, and 85 percent of commercial fishermen oppose the mine.

I urge you to listen to those voices, and for the sake of the Bristol Bay watershed, its world-class salmon fishery, and its people, keep the door closed on Pebble Mine. If you don’t, you will have to answer to me and hundreds of thousands of people in Alaska and across the United States and the world who stand in fervent opposition to this toxic mega-mine.