Tell Democratic leaders: Stand up for Dreamers - without any anti-immigrant provisions 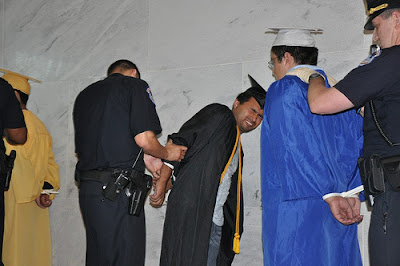 The petition to Democratic leaders reads:

“Demand that legislation to protect Dreamers does not include compromises with Republicans’ anti-immigrant agenda. Refuse to trade Dreamers for expanded immigration enforcement, walling off our borders, or attacking other immigrants and refugees.”

Donald Trump does not care about Dreamers. First he killed the Deferred Action for Childhood Arrivals (DACA) program. Now he is using Dreamers as bargaining chips to advance his racist, anti-immigrant agenda and put Dreamers’ families and communities at risk.

Trump just demanded that any congressional effort to restore DACA must also fund his border wall, make deportations easier, crack down on sanctuary cities and fundamentally restructure and shrink our immigration system.1

Democrats must hold a hard line and refuse to allow protections for Dreamers to come at the expense of their families and communities. Can you help keep the pressure on Democratic leaders today?

Tell Democratic leaders: Stand up for immigrants with no compromise and no strings attached. Click here to sign the petition.

Last month, Democratic leaders Rep. Nancy Pelosi and Sen. Chuck Schumer forced Trump to strike a deal on raising the debt ceiling and government spending limit that will force Republicans back to the bargaining table before the end of the year.2 It was a move that gave Democrats short-term leverage to block Trump’s extreme agenda and keep his dangerous priorities out of must-pass spending bills.

Standing with immigrants after Trump’s attack on DACA, and refusing to let Dreamers be bargaining chips, should be one of their top priorities. But less than a week after they forced Republicans’ hands on the debt ceiling, Rep. Pelosi and Sen. Schumer seemed too willing to compromise. They announced, and the Trump administration immediately refuted, that they had struck another deal with Trump to “enshrine the protections of DACA into law quickly, and to work out a package of border security, excluding the wall, that's acceptable to both sides.”3

Trump is a xenophobe and a racist whose entire administration is premised on demonizing and terrorizing immigrants. He leads a Republican Party that has spent decades blaming its base’s economic insecurity on immigrants and people of color instead of its billionaire backers. This is not the time for Democrats to “accept” any part of their agenda. We have to make sure that Rep. Pelosi and Sen. Schumer lead their caucus in complete resistance to Trump. They must demand that a clean version of the DREAM Act is part of must-pass end of year legislation, stop anti-immigrant Republicans from leveraging DACA to ramp-up immigration enforcement or wall off our borders, and refuse to compromise when it comes to Dreamers.

Tell Democratic leaders: Stand up for immigrants with no compromise and no strings attached. Click the link below to sign the petition: