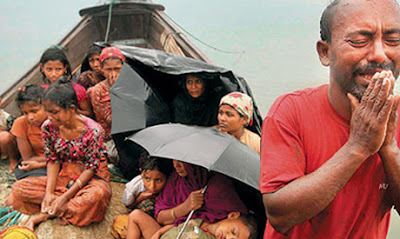 Myanmar’s military is using murder and mayhem to drive out hundreds of thousands of Rohingya Muslims. France’s President Emmanuel Macron is calling it genocide.

The harrowing stories are all over the news. But what the media rarely mentions is that governments all around the world are enabling it -- allowing arms companies to sell and profit from ethnic cleansing and even providing military training.

Under pressure governments are slowly waking up -- just days ago UK Prime Minister Theresa May announced an end to all training of and co-operation with the Myanmar military, until the violence stops.

If enough of us join the call for a global arms embargo we can make other governments -- and even the UN -- follow suit.

The Myanmar military and militia groups are deliberately and systematically targeting the Rohingya Muslim population -- attempting to kill, injure, and remove an entire population.

This is ethnic cleansing.

In the words of one Rohingya man:

“The military attacked at 11am. They started shooting at houses and at people...When people fled, they burned the houses with bottles of petrol and rocket launchers... Now there are no homes in our area – all are burned completely.”

Our governments all around the world are responsible for letting this mass murder and forced displacement happen.

Israeli companies are arming the military and one of them is even training forces in Rakhine state, where much of the violence is taking place.

The Israeli company TAR Ideal Concept have even posted pictures on their website of its staff teaching combat tactics and how to handle weapons.

This is all in spite of EU sanctions on Myanmar.

The UK has just announced its decision to stop training and co-operating with the Myanmar military.

Now we need to keep the momentum going, double down and put pressure on all our governments to enact a fully functioning global arms embargo on Myanmar.

The oppression of Rohingya Muslims at the hands of the Myanmar military has a long history. This most recent campaign of ethnic cleansing has brought it to the international media’s attention.

Now we know what is happening, it’s time we moved to action.

Rohingya activists and campaigners around the world have been working tirelessly to draw the world’s attention as the Myanmar military try to wipe out the Rohingya population.

Right now -- they need as many of us as possible to stand with them. Evil acts can only flourish when enough of us turn away.

Please, take action now and join the call for a global arms embargo