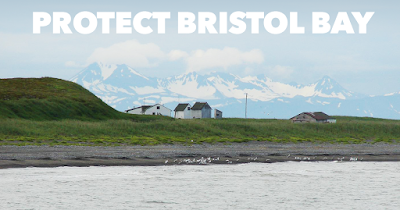 The Environmental Protection Agency (EPA) has moved to cancel its 2014 protections for the majestic Bristol Bay. Lifting these restrictions opens the Bay up to foreign mining companies to develop a toxic, open pit mine near some of our most precious salmon headwaters. Now, it’s time to reignite the fight to protect Bristol Bay!

Bristol Bay is home to one of the most valuable fishing grounds in the United States, contributing more than $1 billion in annual revenue and thousands of jobs. But if approved, this project would jeopardize the integrity of Alaskan communities and environment. Open pit mining would directly impact the world’s largest and greatest sockeye salmon run, putting in jeopardy 14,000 fishing jobs, a 10,000-year cultural tradition of subsistence, and a huge sport fishing and tourism economy.

The EPA is accepting public comments until October 17. We must raise our voices louder than ever to keep Big Polluters OUT of Bristol Bay.
Posted by Jana Segal at 9:55 AM