Take action: Urge your congress member to cosponsor the Open Our Democracy Act. 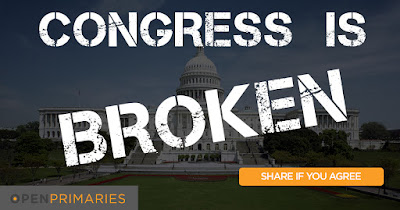 Washington is a mess. And you and I both know that closed primaries and partisan gerrymandering are only making the problem worse.

Congressman John Delaney just reintroduced the Open Our Democracy Act, which would implement open primaries and end gerrymandering for congressional races. It would also make Election Day a federal holiday.

Of course, this bill will need the people behind it in order to advance. That’s where we come in...

Imagine that: John Delaney is standing up to the entire Washington establishment and saying “enough is enough.” No more closed primaries. No more gerrymandered districts where the parties can control the outcome to their advantage. It’s time to empower the voters.

Click here to urge your congress member to cosponsor the Open Our Democracy Act.

The problem is so bad that the Harvard Business Report just released a report where they said that, “the current partisan primary system is perhaps the single most powerful obstacle to achieving outcomes for the common good.” That’s a powerful statement.

Let’s pressure Congress to give the Open Our Democracy Act a hearing. Click here to send your congress member a letter requesting them to cosponsor this crucial bill.

When you’re done, please, share this page with your network.