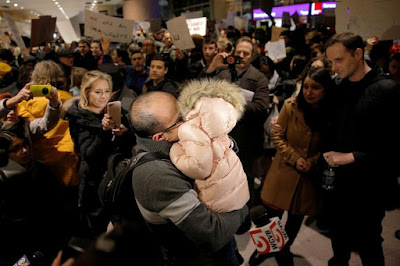 Yesterday, a federal court found the third iteration of the White House's “travel ban” to be just as unconstitutional as the first two. While this halt is welcome, we cannot take it to mean that Trump will abandon his bigoted campaign promise to ban entry into the United States for some foreign nationals or those of Muslim faith.

It is time for the White House to hear directly from you. Click here to tell White House officials to end travel bans.

Discriminating against people due to their nationality or religion is against our nation's values. What's more, the White House's fixation on what is really a Muslim ban, one that they cannot prove will have any demonstrable effect on national security, has prevented us from addressing the serious issues that we face as a nation.

The people of Iran, Syria, Yemen, Somalia, Libya, Chad, Venezuela, and North Korea have endured harsh conditions under repressive regimes. Keeping refugees from reaching a safe haven makes our country culpable in their suffering. If we are to realize true equality for all human beings, we need to stop the paranoia and stereotypes that vilify innocent people for their faith, the color of their skin, or the language they speak.

Call the White House and tell them to abandon the travel ban. We are not going to tolerate religious tests as a qualification to enter the land of the free.


TALKING POINTS: WHAT YOU CAN SAY ABOUT WHY THE WHITE HOUSE SHOULD STOP THE MUSLIM BAN

*The White House's racist, unconstitutional Muslim ban has already been struck down three times in federal court.
*There is no concrete evidence to support Trump's assertion that banning travel from these countries will make us safer.
*The Muslim ban will keep families apart and endanger those attempting to flee violence and persecution.
*A Muslim ban is antithetical to American ideals of religious freedom, liberty, and equality for all.
*Paranoia and stereotyping have stoked division and hatred within our country.

#notravelbans
Posted by Jana Segal at 11:58 AM