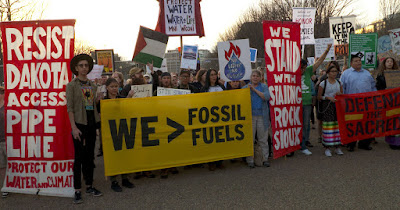 As fossil fuel cronies and an anti-science agenda erode our federal government, it's clear we need to flex our consumer power in the fight for climate justice.

Big banks like Wells Fargo fund the companies behind dangerous pipelines -- like Keystone XL, Line 3, and Dakota Access -- that threaten Indigenous rights, our climate, and our communities.

Send Wells Fargo a message and tell them not to fund Keystone XL!

Keystone XL poses a grave and immediate threat to our climate and to every community it cuts through. It would carry 830,000 barrels of the world's dirtiest oil -- tar sands -- every day from Alberta, Canada, to the U.S. Gulf Coast. It would be responsible for annual greenhouse gas emissions each year equal to 37.7 million cars -- a disaster for our climate.

The pipeline would cut directly through Sioux treaty lands and near several other tribal reservations and the Ponca Trail of Tears, yet Tribal Nations in Nebraska and South Dakota have not been properly consulted.

But the movement of citizens and stakeholders calling on big banks like Wells Fargo to divest from pipelines is growing and working.

Earlier this year the city of Seattle became the first major city to divest from Wells Fargo because of the company's involvement with pipelines. After public pressure, U.S. Bank formally excluded gas and oil pipelines from their project financing. And it's becoming clear that Keystone XL is a risky investment, as companies like Shell and Exxon sell off their tar sands instead of making plans to ship them through the pipeline.

Add your voice to this fight and help build the momentum to stop dirty, dangerous pipelines!

- SierraRise
Posted by Jana Segal at 9:24 AM