RELIGIOUS FREEDOM MUST DO NO HARM 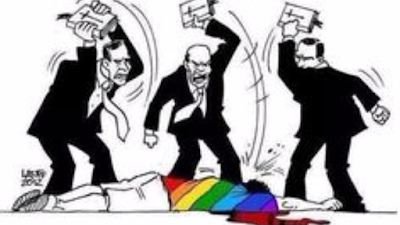 Trump’s Department of Health and Human Services released a disturbing new plan that redefines life as beginning at conception and removes all references to LGBTQ people and their health needs – while heavily emphasizing the role of religiously affiliated organizations.

This is yet another case of this administration treating religion as a license to discriminate against women and LGBTQ people.

Religious freedom is a fundamental American value and a basic tenant of our Constitution, but it can’t be used as a weapon to cause harm to others.

This is why the ACLU is throwing it's full support behind the Do No Harm Act. This bill – currently in front of Congress – amends the too-frequently-misused Religious Freedom Restoration Act to ensure that protections for religious freedom can’t be used as an excuse to harm others.

Contact your representative today and tell them to co-sponsor the Do No Harm Act.

This bill would clarify that the 1993 Religious Freedom Restoration Act can’t be used to exempt any business or individual from laws that:


This latest news out of HHS follows a pattern of attacks on women’s health and LGBTQ equality under the guise of religious liberty. Most recently, the notorious “birth control rules” authorize employers and universities to deny employees and students contraceptive coverage based on religious or moral objections.

And the Justice Department’s sweeping new guidance to federal agencies encourages a dangerously broad reading of religious freedom laws that could endanger women, LGBTQ people, and religious minorities.
The Do No Harm Act furthers true religious freedom. It clarifies that we’re all free to practice our faith, but not to use religion as an excuse to cause harm to others

The Do No Harm Act would limit the dangerous ways we have been seeing the 1993 Religious Freedom Restoration Act (RFRA) used to justify discriminatory acts in this country over the past two decades.

Specifically, the Do No Harm Act would clarify that the RFRA can’t be used to exempt anyone from laws that prohibit discrimination, require equal pay, protect child welfare, or guarantee access to health care.

The Do No Harm Act furthers true religious freedom.

We’re all free to believe – or not – as we see fit, and to practice our faith. What we can’t do is use religion as an excuse to discriminate against or harm others.

Tell your members of Congress you want them to co-sponsor the Do No Harm Act today.