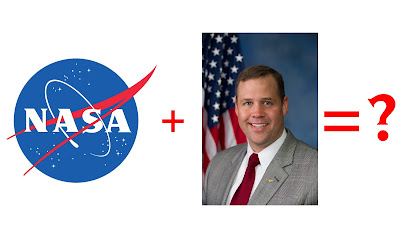 More than 52,728 Climate Hawks Vote members signed petitions to challenge their senators to oppose Trump’s nominee to lead NASA, Jim Bridenstine. The Commerce Committee is meeting to vote on Bridenstine’s nomination—your call could help determine whether or not he sinks or swims.

It’s important your senators hear from you before Wednesday’s vote.Follow the steps below to call now.

Hi, my name is ____, and I am your constituent calling from _____. I am calling to demand that Senator ____ vote to oppose the confirmation of Jim Bridenstine for NASA Administrator. Bridenstine’s ties to the oil and gas industry, his lack of scientific background, his denial of climate change, his bigotry, and his support for the privatization of space exploration are disqualifying. Will Senator ____ commit to voting no on Bridenstine’s confirmation on Wednesday?

Bridenstine, an oil-soaked Congressman from Oklahoma, is an outspoken denier of manmade climate change. He is an enemy of all elements of NASA’s mission “to understand and protect our home planet, to explore the universe, and to inspire the next generation of explorers.”

Bridenstine’s climate denial is no theoretical problem — it is a deadly threat. Since Bridenstine’s nomination on September 2, NASA satellites and climate scientists have been critical to saving lives with Hurricanes Harvey, Irma, and Maria, the California wildfires, and the other climate disasters sweeping the planet. Bridenstine has sought to eliminate NASA's climate programs for years.

Let’s stop him — and let every Senator know we will hold them accountable if they support this radical climate denier.

You can also email your Senators to oppose Bridenstine.