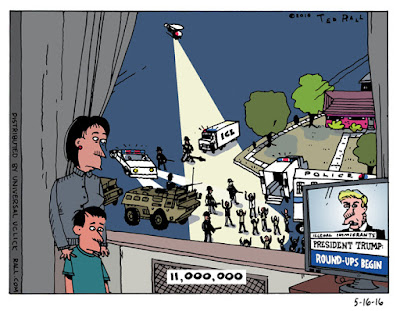 Donald Trump’s Extreme Vetting Program is designed to criminalize immigrants and Muslims and keep them out of the country – and his Department of Homeland Security (DHS) is recruiting tech companies to help build it.
Tech giant IBM has already shown interest in designing the advanced computer system that will help Trump spy on, target and terrorize immigrants.1 We must act now to stop IBM from building this racist machine.
Tell IBM: Don’t help Trump spy on immigrants. Refuse to build his Extreme Vetting Program. Click here to sign the petition.
DHS’s Extreme Vetting Program will try to use a computer algorithm to predict whether an immigrant applying for a visa will become a positive member of society or a criminal who will commit acts of terror.2 Leading data scientists agree that it would be impossible to create a system to accurately evaluate anyone based on these criteria.3 It is also impossible to create algorithms that are free of systemic racism as they mirror and replicate the biases of the people and cultures that create them.4
If the Trump regime – an administration stacked with white nationalists and neo-Nazis – succeeds at building an algorithm to expand and automate DHS’ visa vetting process, it would make the country’s immigration system even more discriminatory, ramp up the federal government’s surveillance of immigrants, and strengthen and institutionalize Trump’s racist, xenophobic and anti-Muslim policies. We cannot allow IBM to help make that happen.
Tell IBM: Don’t help Trump spy on immigrants. Refuse to build his Extreme Vetting Program. Click here to sign the petition.
IBM claims to be a global company that supports immigrants, but its actions tell a different story. IBM executives have been playing both sides with Trump’s anti-immigrant administration. When Trump ended the Deferred Action for Childhood Arrivals program, IBM publicly condemned his decision and the company’s CEO Ginni Rometty visited members of Congress to demand they restore the program immediately.5 But Rometty also helped normalize and legitimize Trump’s Muslim ban, attacks on sanctuary cities and his entire hateful agenda by serving on his business council until it dissolved, despite demands from shareholders and customers that she step down.6 Now the multinational technology company is one of many corporations that have shown interest in building Trump’s Extreme Vetting Program.
Enough is enough. IBM must pick a side, which is why we are teaming up with our friends at Center for Media Justice, Color Of Change, Daily Kos and United We Dream to force IBM to make its position clear. Whether IBM lives up to its commitment to support immigrants and refuses to build Trump’s extreme vetting machine or helps him surveil, target and terrorize people simply because they were born in another country is up to us.Add your name to make sure IBM does the right thing.
Tell IBM: Don’t help Trump spy on immigrants. Refuse to build his Extreme Vetting Program. Click the link below to sign the petition.
https://act.credoaction.com/sign/ibm-trump?t=8&akid=26096%2E3130208%2EneGV1Z
- Nicole Regalado
CREDO Action from Working Assets
Add your name:
References:
Posted by Jana Segal at 4:01 PM