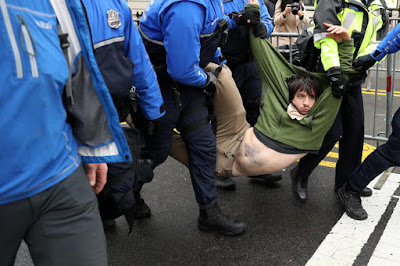 When a group of over 200 people, including journalists and legal observers, attended a protest of Trump’s inauguration, D.C. police indiscriminately swept them up and arrested them. Now they’re facing up 70 years in prison for taking part in – or even just being near – a political protest.1

Sources:
1. The Intercept, "Hundreds Face Conspiracy Charges For Actions Of A Few During Inauguration Day Protests," October 25, 2017
2. The Nation, "The Prosecution of Inauguration-Day Protesters Is a Threat to DissOctober 20, 2017
ent,"
Posted by Jana Segal at 8:19 AM