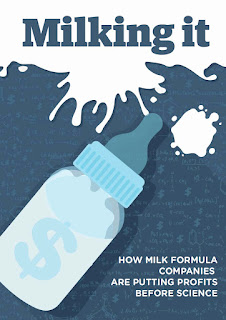 Nestlé has just been caught at it again -- using manipulative marketing tactics to take advantage of families and infants around the world.  Tell Nestlé’s CEO to let nutritional science -- not corporate greed -- lead the company’s infant formula product strategy.

Nestlé boasts that it has over 150 years of trusted nutrition expertise, but it is also notorious for manipulative marketing of infant formula wherever it can get away with it.

A report just published reveals a telling lack of nutritional science behind the ever-expanding product ranges of the world’s top four baby milk companies. Now is our best chance to force Nestlé and its infant formula competitors to stop their manipulative marketing arms race.

Nestlé is the global market-leader, and it also claims to be science-led. It’s time to reign in the marketers!

Tell Nestlé to simply sell affordable, safe, and nutritionally complete formula, and cut out the marketing designed to lure and fleece parents.

The milk formula business is worth more than $45 billion globally, and projected to increase by over 50% by 2020 due to rapid expansion in Asia.

The report by Changing Markets Foundation, Milking It: How milk formula companies are putting profits before science, reviewed more than 400 infant milks for babies less than one year old made by Nestlé, Danone, Mead Johnson Nutrition, and Abbott. It concluded that product differentiation is not science-based, but instead informed by research into consumer preferences, and guided by a desire to increase manufacturers’ market share and profits. In other words: it’s pure greed.

Breast milk substitutes are legitimate products for when a child is not breastfed and does not have access to expressed or donor breast milk. But there is no excuse for brands like Nestlé to use manipulative marketing to swindle sleep-deprived and cash-strapped parents, who only want what’s best for their children.

Product differentials are deliberately designed to appeal to the tastes and lifestyle preferences of parents, or prevailing fears and fads. Manufacturers including Nestlé then package these products in ‘premium’ ranges and charge exorbitant prices for what should be an uncomplicated and affordable commodity.

Decades of tireless campaigning by citizens groups, churches, and progressive politicians has led to international standards controlling infant formula ingredients and marketing. Stricter government regulation and enforcement is still needed, but public pressure on brands can also stop them. Let’s strike now while the iron is hot!