Fight for a humane tax plan and healthcare: Share your personal story with these maverick senators 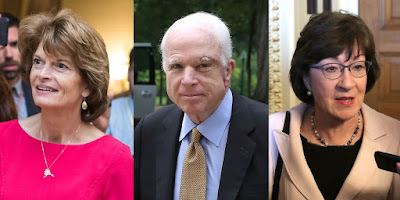 First, Senator Ron Johnson, an arch-conservative from Wisconsin, came out against the Republican Party's misguided plan to cut taxes for the wealthy and sabotage Obamacare.1 Then, 13 Republicans voted against the House tax bill. Now, Republican Senators Susan Collins and Lisa Murkowski seem to be leaning our way, and a new analysis shows the Senate tax plan will actually RAISE taxes on the poor and the middle class--a huge political blow to the bill's chances.2,3

If Sens. Collins, Murkowski, and Johnson vote no, the bill is dead. That's why we're making Senate phones ring off the hook in Washington, D.C., and organizing our members in key states to tell their stories about what this tax DEFORM plan would mean for them.

Desperate for a win, Senator Mitch McConnell and Trump are pushing to pass their rich-person giveaway when they come back after Thanksgiving. That means we've got just one week to raise hell in Maine, Arizona, Nevada, and Alaska--the same kind of organizing that helped us kill Trumpcare earlier this year.

But just like this summer, we have to keep the pressure on senators from these states. We've got the cold hard facts: 13 million will lose their health insurance.4 Americans earning less than $75,000 a year will see their taxes INCREASE.5

We have to back up those facts with the stories of real people, real voters, who can't afford for this dangerous tax plan to become law.

Does the #GOPTaxPlan treat corporations and individuals the same in terms of who gets to keep deductions and who doesn’t? Nope, not even close. WATCH VIDEO.

Tax reform roadblocks emerge in Senate: Sens. John McCain and Lisa Murkowski have been wildcards, avoiding taking a public position on the proposal.

Senator McCain is also also a key player in this fight.

You can contact Sen. McCain at his Tucson Office:

Here's mine for inspiration:

I live in Tucson where so many of your constituents are living paycheck to paycheck. They are one medical emergency from going bankrupt and losing their homes. Everyday I see more and more homeless people - some vets, some people who had to quit their jobs to care for a sick loved one, some who had a medical emergency. I'm urging you to take care of vulnerable Tucsonans. It is just heartless to pass a huge tax cut for the wealthiest Americans on the back of the most vulnerable. Why are you raising taxes on married couples who make less that $19050 a year? When my husband left me, I struggled to get by on spousal support. No one would hire me because I had been a stay at home mom. I could have easily become homeless. So many of us are just one emergency away from being homeless.

My parents in Missouri are just getting by on their limited retirement plan and social security.  My dad recently had gallbladder surgery. He could not have had that surgery without the help of Medicare.  They finally had to get a home health aide. That is also paid for by Medicare. This immoral tax plan even cuts the dependent deduction that enables families to take care of their elderly parents at home AND the deduction for their medical expenses. How are people supposed to get by?

Senator McCain, please, don't take away our healthcare or make it even harder on the poor. I know you are a moral man; vote your conscious. Vote no on that cruel tax bill.