Keep Toxic Michael Dourson away from our EPA 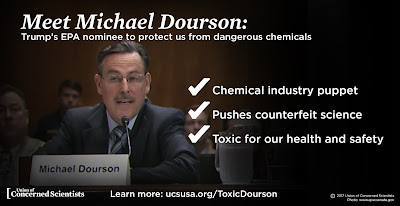 We cannot allow Dourson, who spent his career using all the tricks in the corporate playbook to protect chemical industries from accountability when they put our health at risk, to be put in charge of protecting us from toxic pollution.

Dourson's conflict of interest and suspect history has caught the public's attention—and has fostered caution from senators, who are hearing from their constituents just why this nomination poses real danger to their state's safety. But special interests who would profit from Dourson's proposed position are pushing to get him in power at the EPA. That's why we need to keep the pressure on our senators to vote NO.

With a possible vote coming up to confirm or reject his nomination, it's important that your senators hear from you today.

Urge your senators to oppose this toxic nomination. It could mean the difference for true protection from toxic chemicals and pollution for communities throughout the United States.

Send the following message to your senators by clicking this link.
(personalize it for more impact)

As your constituent, I am asking you to oppose the nomination of Michael Dourson as the lead of the Environmental Protection Agency's (EPA) Office of Chemical Safety and Pollution Prevention.

Mr. Dourson has a clear conflict of interest, industry ties, and an alarming history of weakening accountability for chemical plants’ negative impacts on public safety. These dynamics make him completely inappropriate for the job.