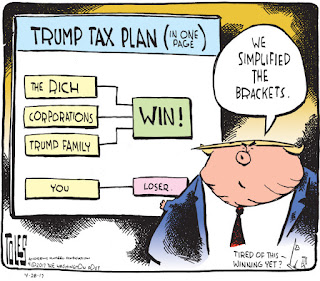 Yesterday, Republican leaders released their tax plan: a government-funded handout to millionaires, billionaires, and big corporations -- at the expense of everyone else.

Paul Ryan and House Republicans delayed releasing their plan for days because they knew it wasn’t ready for prime time. But now it’s here, and it’s worse than we expected.

This half-baked, “trickle-down” plan would make rising income inequality worse -- a lot worse. Paul Ryan knows his plan is unpopular, so he is rushing toward a vote. Your representative could be the key to stopping it -- but they need to hear from you.

Click here to call your representative today and tell them to vote NO on Trump’s tax scam.

Trump’s tax scam is nothing more than a taxpayer-funded handout to billionaires and big corporations at the expense of working families. Call your representative and tell them to vote NO!

Here are three reasons we must stop this bill:
It provides the Trump family a billion-dollar handout, by eliminating the estate tax. (Talk about self-serving!)
It eliminates popular deductions that middle-class families rely on just to slash the tax rate for big corporations.
It opens the floodgates to churches acting like Super PACs by reversing a decades-old law that prevents religious groups from endorsing political candidates.

This bill is terrible, and it should be a non-starter for every member of Congress who’s serious about serving the American people.

The stakes are too high to do nothing.

Call your representative today and tell them to vote NO:

- Sean Eldridge, Stand Up America
Posted by Jana Segal at 11:38 AM