Sign on as a citizen co-sponsor of the OFF Act: Off Fossil Fuels for a Better Future Act 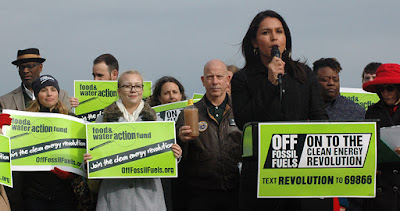 Tulsi Gabbard: We Must Pass The OFF Act to Protect Our People and Planet

Washington, DC--Hawai`i Congresswoman Tulsi Gabbard released a video today calling on citizen cosponsors to join the fight to pass her bill, the Off Fossil Fuels for a Better Future Act (H.R. 3671 - The OFF Act), which would transition the United States away from its dependence on fossil fuels to 100% renewable energy by 2035.Learn more at VoteTulsi.com/OffAct

Sign on as a citizen co-sponsor of the OFF Act.

The OFF Act eliminates tax breaks for the fossil fuels industry and provides workers with the resources and support they need to become a part of a new clean energy economy. The bill increases US competitiveness by investing in clean energy technologies, creating jobs, and providing resources and training programs to ensure the new skilled workforce is the best it can be. Currently, the bill has been cosponsored by 14 Members of Congress and supported by more than four hundred clean energy, climate change, and environmental justice organizations.

In her video released today (recorded on October 26th), Congresswoman Tulsi Gabbard says, "Last week, a Louisiana pipeline spilled 672,000 gallons of crude oil into the Gulf of Mexico. Meanwhile, an oil barge carrying 133,000 barrels of oil exploded off the coast of Texas--leaving one worker dead and two missing. Millions of Americans are still recovering from the recent hurricanes that devastated communities all across Texas, Louisiana, Florida, Puerto Rico, and the U.S. Virgin Islands and the deadly wildfires in California.

"Despite these environmental crises, EPA Administrator Scott Pruitt continues to make backroom deals with fossil fuel industry giants at the expense of our environment and the wellbeing of the American people. That's why I'm working to pass my bill, the Off Fossil Fuels for a Better Future Act, which would transition our country away from fossil fuel sources to 100% renewable energy by 2035. To begin to heal our planet and strengthen our future, we must break our addiction to fossil fuels by investing in clean energy. Passing my bill, the OFF Act, will also increase our country's global competitiveness by creating domestic clean energy technologies, jobs, and training programs.

"Earlier today, I was joined by two of my colleagues, Barbara Lee and Nanette Diaz Barragan, as well as leaders from organizations like Food & Water Watch, National Nurses United, Casa Pueblo, and other local officials and grassroots organizers as we all gathered to urge Congress to pass the Off Fossil Fuels Act. Now, I'm asking you to join us in this critical fight by signing on as a citizen cosponsor at VoteTulsi.com/OffAct. We must take action. Our people and our planet and our future depend on it."

In a message released this morning, Congresswoman Tulsi Gabbard elaborates on the importance of passing the OFF Act.

Tulsi Gabbard has served as the U.S. Representative for Hawaii's Second Congressional District since 2013. At the age of nineteen, she co-founded Healthy Hawai`i Coalition, a non-profit grassroots organization whose mission is to protect the environment and improve individual and community health. Tulsi has a proven record of defending our air, land, and water and has been endorsed by the Sierra Club, Ocean Champions, and League of Conservation Voters (which gave her a "lifetime" pro-environment score of 100%), among others. Tulsi has consistently voted against the keystone pipeline and other threats to the environment, while advocating for legislation that combats climate change, supports clean energy, and protects the planet.

Show support of Tulsi's brave act by signing on as a citizen co-sponsor of the OFF Act.
Posted by Jana Segal at 6:57 PM

Email ThisBlogThis!Share to TwitterShare to FacebookShare to Pinterest
Labels: H.R. 3671, OFF ACT, Off Fossil Fuels for a Better Future Act (H.R. 3671 - The OFF Act), Rep. Tulsi Gabbard, Tulsi Gabbard's video on OFF Act